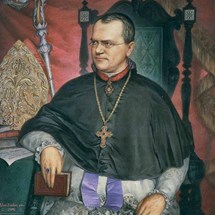 Scientists from Brno’s Masaryk University  were analysing the DNA of the “father of genetics”, Augustinian friar Gregor Mendel in cooperation with the CERIT-SC Center. The project was held on the occasion of the 200th anniversary of Mendel’s birth. The remains of Gregor Johann Mendel were exhumed from the Augustinian tomb in June of last year. Since then, the team of scientists has collected several DNA samples from Mendel’s bones, which were analysed and attempt to process his entire genome.

The first results of the research were published in late 2021. Based on swaps taken from items of daily use, such as glasses, knife, books, microscope and cane provided by the abbey they managed to secure some biological material. Using mitochondrial DNA sequencing they compared it with the DNA samples taken on the skeletal remains from the tomb, only to find match which confirmed that the deceased is indeed Gregor Johann Mendel.

Using the latest approaches in the molecular biology and bioinformatics, we helped to reconstruct Mendel’s genome and identified genetic variants that might have shaped his life and health. Variants' impact to phenotype is currently under investigation by biologists and physicians. In the opportunity of Mendel’s bicentennial anniversary, we consider this as an important contribution and a gift to this genius.

In total, we managed to reconstruct 91% of Mendel’s genome, 99% of exome, with 9.26x coverage in average. We detected 4.1 million highly confident SNV/Indel variants genome-wide. Of them, 57308 occurred in the gene coding regions.

Based on the study of Mendel’s remains experts learned new information about his life and physical attributes, such as height, shoe size, brain size or the origins of his ancestors. After basic measurements, we know that Mendel was 168 centimetres tall and his foot was 27 centimetres long. What is interesting is the large volume of his cerebellum - 1,580 cubic centimetres. The current average skull volume for men is around 1 350 cubic centimetres. The biological state of his body corresponded to the age of 65 years, although he died three years earlier.

The results were presented at the Mendel Genetics Conference https://www.mendel22.cz/about-conference/

Brno City Hall and the Augustinian Order prepared significant celebrations for the July 2022 anniversary of Mendel’s birth. Planned events include a concert by internationally renowned artists, the reconstruction of Mendel’s greenhouse in which he conducted his genetic research on plants and an international Mendel Genetics Conference.

Munipress Publishing has published a book summarizing the results of DNA analysis to mark the 200th anniversary of G. J. Mendel The book maps the ways to analyse the genome of Gregor Johann Mendel, a project carried out to mark the 200th anniversary of the birth of this important scientist. It describes the exhumation of his remains from the Augustinian tomb at the Central Cemetery in Brno, the scientific examination that followed, and the search for traces of Mendel’s DNA on his personal belongings kept in the Augustinian Abbey in Old Brno.
The individual chapters, and the ways of research, introduce the reader to the initial impulses leading to the archaeological research on the tomb and the subsequent analysis of Mendel’s genome. They describe the process of identifying the remains found in the grave with the person of Abbot Mendel, the anthropological research on his skeletal remains, as well as the process of isolation and analysis of the DNA of this historical figure. Rich photographic documentation chronicles the exciting work of the scientific team. Thanks to their efforts, the book reveals surprising findings and new, important details about the founder of genetics.
Texts by: Eva Drozdová, Dana Fialová, Filip Pardy, Michael Doubek, Blanka Křížová, Marek Peška, Antonín Zůbek, Kristýna Brzobohatá, Jan Emil Biernat, Šárka Pospíšilová. Foreword: Jiří Dušek.